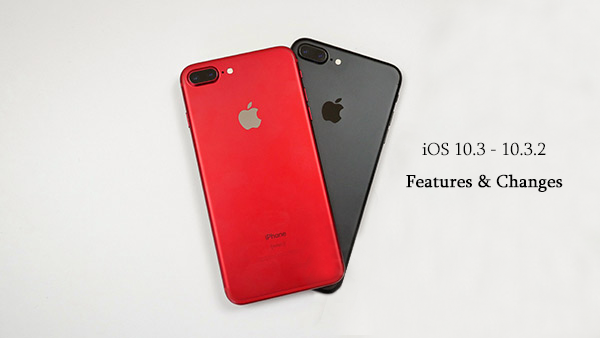 iPhones are one of the those trending technology that rules the market worldwide nowadays. iPhones runs with iOS mobile operating system, designed and developed by Apple Inc. The tech giants have rolled out various updates for their users, but this time the company has come out with a nasty update with many surprising features.

iOS 10.3 is the one released recently by Apple which is surprisingly the last roll out in iOS 10. Notably, the features appended along with the update enables your iPhone/iPad to be smarter and faster than ever before. This time you can find some changes in user interface along with some features that were in the queue list for a long time.

Apple File System, abbreviated as APFS is a new file system which was developed and deployed by Apple with an intention to resolve the issues of HFS (Hierarchical File System) in Mac OS. A better performance with considerable storage area of upto 5gb can be gained using APFS. Many users have been complaining about degradation in performance for the last few updates, luckily iOS 10.3 is expected to give a smoother run on the device.

AirPod is a wireless earbud developed by Apple to hear any media enhancement while connected with bluetooth. Well a new feature has been added to “Find My iPhone” app which enables high pitched sound with increasing frequency in Airpod on a single tap of a button in the app. But initially you have to ensure your iPhone is connected to the the device through bluetooth. Also it helps you to know the last location from where the device was connected to the phone.

Want to know the last cricket match score ? Ask Siri, which you can think as a cricket updates search technology and gives you the latest cricket match updates within seconds of a search. Scores for the world cup series as well as champions trophy details can be retrieved using this technology. Another surprising feature is that it can help schedule Uber trips and payment of bills hours before the start.

Finally the developers will be able to reply to the reviews put by the user in the app store. These replies will be visible to everyone and if you find it helpful, the rate can be rated by with the help of a 3D touch. In appstore and Itunes the users can now disable in-app purchases and rating popups. Also the developers can change the app icon with the prior permission of the user, without applying for any update.

Eventhough there has been not that much alterations brought to the user interfaces with this update, small changes has applied some amazing techniques on the screen. Edges can be seen getting rounded when an app is closed, which suits the display well. When entering a passcode, the empty state of code will be shown in circles instead of dashes. In the mail app, up & down arrows are introduced to navigate to the previous and next mail respectively.

When you open the “Settings” page, it will be in a new style with a new profile section. A profile icon and name will be displayed on the top, tapping on which it shows all the details regarding your iPhone such as Apple ID, iCloud, iTunes and appstore details. Also, any important notifications/ updates related to the account can be viewed below. iCloud has introduced a new bar at the top which helps to understand how much space has been taken up in the storage area and the devices connected to the iCloud account.

In the map, you can see the flat earth view, and on repeated zooming shows the satellite and a 3D globe view. Small icons showing weather and current temperature can be seen at the bottom right corner of the screen when you search for a city. In the weather app, a 3D touch can be made to view the hourly forecast and detailed weather forecast on tapping again. However this feature will only be available in iPhone 6S or above versions.

For those using Apple watch, there is a happy news you were waiting for. This watch get released along with 10.3 update and surprisingly it has got a theatre mode. Simple action like raising the wrist will enable this mode which puts the watch into silent mode and disables the wake screen feature. This stops the device from automatically switch on the screen but still you can get the notifications.

CarPlay is a Apple product, which allows the user to view in a radio or head unit and also helps to control the apps in iPhone. In the new release, it makes switching between apps much easier to do by displaying the 3 most recent apps in a left sidebar always, instead of navigating to homepage each time to select the application. Also, it list charging stations for Electric Vehicles (EVs) and an option in the “About” section, which shows the current software version.

Podcasts is an audio file made available in the internet in an sequence, which can be downloaded to a device. Now this app has its own widget where you can view the different artworks of the podcast, 4 in compact mode and 8 in expanded mode. However there is no control over the playback like in a music player, The only functionality is that podcast playback can be started with a tap of a finger.